In a recent article on the newswire of RunnersWorld.com, the story of Derrick Hayes,  exemplifies a form of bias that we don’t often speak of, the bias towards religion.

As the story goes, Hayes, a Texas High School student and track athlete anchored his school’s 4 x 100 meter relay team.  After crossing the finish line in first place, qualifying his team for the State Championships, Hayes lifted his finger and pointed to the heavens, an apparent gesture of his faith.

For this gesture, Hayes team was disqualified and their dreams of running at the state championships dashed.

The reason given for this disqualification “excessive celebration.”

Nowhere has anyone said, that Hayes or his team taunted their competitors, they didn’t high-five and jump, they didn’t do an end zone dance or even pat each other on the butt… no, what happened was Hayes pointed his finger to the heavens.

Our society has gone over the cliff of political correctness when High School students can’t express their excitement at qualifying for the State Championships.  In my mind the “excessive celebration” rule has taken much of the joy out of sport, but this particular case not only ruins the team’s deserved position, but slaps people of faith in the face.

Last week we all celebrated the bravery of Jason Collins as he came out of the closet as an NBA player.  (My comments are here.) Sadly, this story of an athlete’s faith has been largely ignored by the media, the twittervese, blogosphere and leaders.

When Collins came out, he got a phone call from the President of the United States, a tweet from the First Lady and a 90 minute special interview with Oprah.  It seems like someone could at least stand up and say, this isn’t right and we need to honor this kid and his faith instead of punishing him!

If we are ever going to be a nation that honors all of our differences, we must honor everyone, not just those we choose to honor.

When we discuss being disenfranchised we need to remember that many of our citizens feel this way and if we are to be a nation of the people and by the people, we must find a way to live together and appreciate the unique threads that we all bring to our nation’s fabrics.

Week after week we hear about heroes, people who make a difference.  This week I salute a selfless hero who made a difference for someone he doesn’t know and may never know.  Below you will find the news story, as reported by CNN, of a New Hampshire college athlete who put a total stranger’s needs ahead of his own.

NH Athlete Gives Up Career to Give Gift of Life 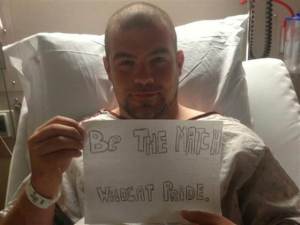 (CNN) — A University of New Hampshire athlete is making a big sacrifice to potentially save a life.  He is ending his career. so he can donate bone marrow to a cancer patient he has never met.

He was a star college athlete, but for the sport of shot put, discus and hammer, which don’t get the same coverage as football.

Lyle recently did something, though, that made him one of the most important people in a stranger’s life:  Lyle donated his bone marrow.

To do it, he had to give up his college athletic career.

Bone marrow can be found in your hip and thigh bones.  It has stem cells in it, which can form into other cells that fight infections or help blood clot.

It’s used to help cancer patients survive, but matching a patient to a donor is very difficult.

When Lyle was a sophomore, he put his name on the donor list.  There was only a small chance he’d ever get called, but senior year, he was.

“When they said I was a match, they said would you like to proceed? And I said absolutely,” Lyle says.

For weeks after the procedure, Lyle’s not allowed to lift more than 20 pounds over his head.  That’s why his college track and field days are over and he doesn’t know who got his bone marrow.

By law, that information’s kept secret for a year.  All he knows: It’s someone who’s 28 years old, has leukemia, and needs his help.

“I mean, you can’t measure a life against really anything. When you have an opportunity to save someone, it’s like, you gotta go for it.”

Lyle’s greatest feat, made from a hospital bed.