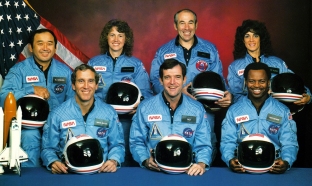 I was standing in the living room of my friend Pam Suttle’s apartment.  Lisa Dudley was with us and we were preparing to head out to our Editorial Writing Class.

This one was different, it had captured the interest of the nation because of Christa McAuliffe, America’s first teacher in space.  During the mission, McAuliffe would be teaching classes broadcast around the nation about the effects of weightlessness and space travel.

As the countdown concluded and the shuttle roared into space our nation once again celebrated the successes of our common efforts.

Then it happened, an explosion.

As smoke trailed across the blue skies, it was obvious to anyone who had ever seen a launch that something had gone terribly wrong.

And then word came from Mission Control, a catastrophic malfunction.

America, and the world, went from celebrating our successes in one moment to a collective grief the next.

Pam, Lisa and I stood in the living room, not speaking just staring at the screen.  The faces of the stunned newsmen and spectators staring back at us, it was a moment when time stood still and our hearts missed a beat.

Making our way to class, the entire campus was in a hushed grief.  Students and teachers alike stared off into space hoping that somehow, someway our best and brightest could be saved.  Searching for seven miracles, somewhere, anywhere.

Settling into our seats, our Professor came into the room and taught us a lesson that many of us would carry into our careers moving forward.

Our assignment was to write an Editorial on the Space Shuttle Challenger explosion.  For long moments I stared at the blank walls of the classroom, but finally the words began to flow onto my paper and my Editorial to those who had given us so much hope, only to be followed by despair was completed.

Over the coming hours, we realized that all were lost on the Challenger, there would be no miracle, the lives of our hero astronauts would be carved on the rough seas they perished in forever.

That night, America was to hear the President’s State of the Union Address before Congress.  The speech was cancelled and instead we sat down in front of our television sets for an address by President Reagan on the day’s tragedy.

His words brought a sense of comfort to the nation and made us all aware that the greatest way to honor the lost was to continue to challenge our best moving forward into the stars of the heavens.

Thirty years ago today, the Space Shuttle Challenger exploded.  I remember it like it was yesterday.

The crew of the space shuttle Challenger honored us by the manner in which they lived their lives. We will never forget them, nor the last time we saw them, this morning, as they prepared for their journey and waved goodbye and “slipped the surly bonds of earth” to “touch the face of God.”  President Ronald Reagan, January 28, 1986.

Everyone knows I have two brothers.  Tom, who we lost in a car wreck at 16 and Sam.

What most people don’t know is we have another guy in our family that is as close to brotherhood as you can get.  My first cousin, Stanley “Pudden” Rumsey has been there all my life.

He has been a backbone and sounding board for Sam and I when we didn’t have anywhere else to turn.  He helped us make tough decisions and supported us when they were made.

Pudden is one of the strongest men I have ever known, enduring his own tragedies, but always keeping his chin up and faith in the Lord.

I love Pudden, he is a cornerstone for all of us.

Happy Birthday buddy, love you much!